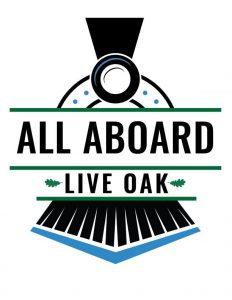 Live Oak, Fla. – The City of Live Oak would like Amtrak and the Southern Rail Commission to consider making Live Oak an “East of NOLA Route” stop. The campaign, “All Aboard Live Oak,” was launched in August and has since been actively engaging the community through social media and local events to encourage petition signatures.

The Sunset Limited Line was a passenger rail service from New Orleans to Jacksonville for many years until Hurricane Katrina damaged extensive portions of the rail in 2005 ending the service. Now, Amtrak and the Southern Rail Commission are interested in resuming this route and have secured several stops. Live Oak is not (yet) one of them.

“While the original line will be reinstated, Amtrak is willing to create additional stops along the way. Live Oak officials, residents and visitors – as well as key legislators, such as Sen. Nelson (D – Fla.) – are determined for us to be one of those additions,” says Live Oak City Councilman and Chairman of the CRA Keith Mixon.

Live Oak believes it can be another one of Amtrak’s success stories because it would generate between $12.25 and $12.72 million annually for Amtrak. Located in the center of the North Florida Business Diamond, Live Oak already is a hub for art, music and ecotourism. The rail service would not only create revenue, but jobs. With eight major annual music festivals, Live Oak’s Spirit of the Suwannee Music Park generates 540 jobs, almost $2.9 million in disposable income for the county and $11.5 million for the state while hosting more than 600,000 guests annually.

“Investing in the Live Oak Station can be an investment in the future of our community. A renovated train station can inspire real estate growth, dining and entertainment development, tourism and local economic spending,” explains Suwannee County Economic Development Director Dr. Alvin B. Jackson.

In addition, railroads have been an integral part of Live Oak and Suwannee County history, making living “way down upon the Suwannee River” possible for generations, with a depot ready for use in one of the safest areas of the city, downtown.

Supporters can get on board by adding their name to the 900+ petition signatures and by visiting the All Aboard Live Oak website, www.allaboardliveoak.com, and Facebook page for resources on history, campaign information, updates, news and more.